Ex-Tropical Cyclone Winston was blowing so hard on Sunday that all Gold Coast beaches were closed.

But gusty crosswinds and searing heat didn’t stop us rowers from donning our zooties and getting on the water at Lake Coomera, about 20 km from Surfers Paradise, for the Urban Rowing Regatta.

It was touch and go for a while, with winds forecast to reach 40 km/hour in time for my races.

It didn’t quite hit that peak, and the full race program went ahead, though it was a wild ride. Suffice to say, I rowed in many different lanes—and that was just in my first race.

The parent-child event was our lunchtime treat—a 500-metre sprint. What a great idea!

For Anthea Bridgeford, what a day for her maiden voyage! She completed the learn-to-row course at the University of Queensland (UQ) a couple of weeks ago and here she is, embarking on her first ever race, with Dad Bill.

“We rowed together once before”, said Anthea, “on Friday. But it wasn’t windy then!”

With 11 crews entered, the event was run in 2 divisions.

After the race, I asked Anthea how she went: “Dad was good. We nearly fell in at the start. Then he said: ‘You’ve got your nerves out now; settle it down.’ Then it was all over. It was fun.”

It may have felt unlike fun to the Bellamys, when father and son capsized at the start.

But, in a terrific show of strength and determination, they clambered back on board and belted down the lumpy course, which was just a tad too short for them to get back in touch with the other crews.

Rowing Dad Ross Williams went as far as switching clubs so that he could row with daughter Lauren, making the move a couple of years ago from Tattersall’s RC to UQ where Lauren was studying physio. The pair cruised home first in their division, in a time of 2:18.36.

“We go for a Sunday row now and again”, said Lauren. “But this was our first race together. And we won!”

Ross was full of praise for his daughter (who later won the Womens Group 3 1X):

“I’m proud of Lauren—for dragging me down the course. Thankfully she’s able to tune it down for her father.”

The winner of division 1 and the fastest duo of the lot were father and son Jeff and Wilsen Conn, winning in 2:09.78. Jeff rows with UQ and Wilsen with St Peters Lutheran College.

Urban Rowing head honcho Wade Ruffin was surprised and delighted at the number of entries for the event. It was such a success, he’s already thinking of ways to expand it:

“We might look at having a mixed family quad event, or maybe even eights, made up of the various parent-child pairs”, said Wade. “It’s a bit of fun.”

I’m hopeful I’ll be able to push the adoption papers through in time for next year.

Here are a few more pics of the event: 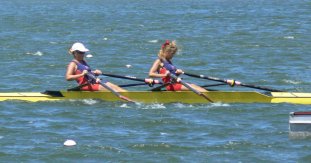 I’ll be posting photos of the other events soon so make sure you FOLLOW my blog so that you get notified when they are up.

Keep scrolling down if you can’t see the FOLLOW button.

One thought on “Masters and apprentices”